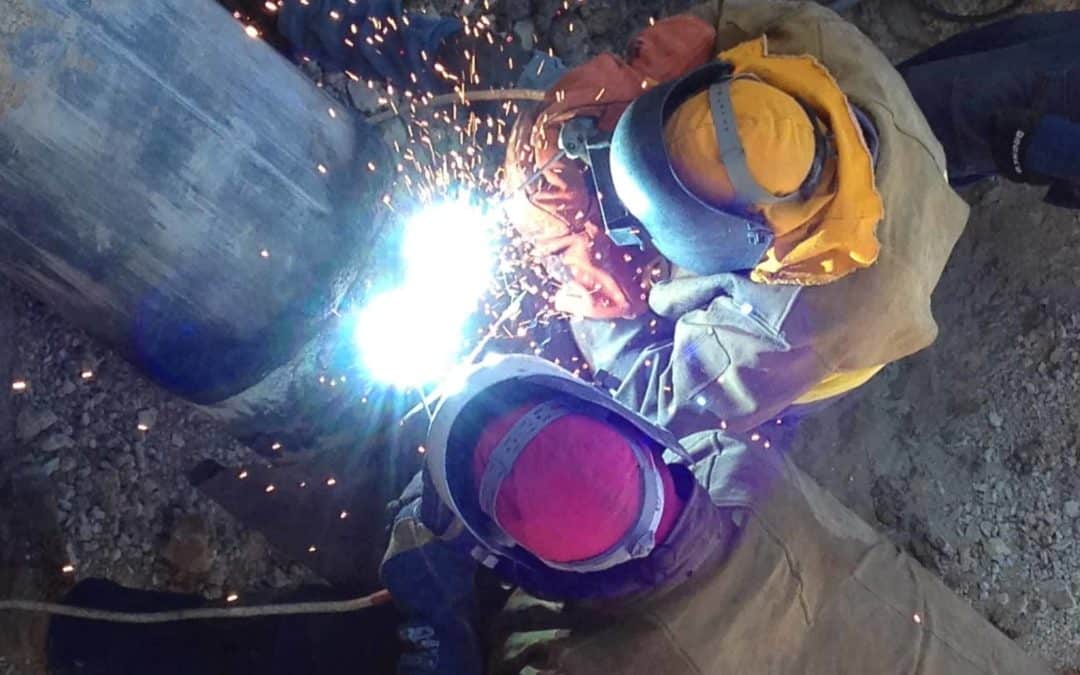 Best practice in design is not simply a matter of deciding on the appropriate weld size or component thickness capable of carrying the service loads; there are many aspects of designing a welded component that need to be considered in addition to calculating permissible stresses. Weldability and mechanical properties such as tensile strength, toughness and fatigue resistance, all of which the designer must be familiar with, have been dealt with in a number of other Job Knowledge articles and will not be covered in this series on design.

In addition to selecting the material and specifying weld sizes, the designer must bear in mind that the decisions that he/she makes will directly affect the cost, safety and serviceability of the structure or component.

It is, therefore, necessary for the designer to:

The topics mentioned above involve a range of specialised technologies and it is, therefore, essential for the designer to seek advice from other professions such as metallurgists and welding engineers and not to rely solely upon their own judgement. This must be done before the design process has proceeded beyond the point of no return; sadly this is often not the case!

To begin let us look at some definitions. Firstly, the joint type or configuration of which there are five fundamental forms as shown in Fig.1. Note that there are no welds associated with these joint types.

A butt weld may be combined with a fillet weld to form a compound weld as illustrated in Fig.3:

Fillet welds are probably the most common type of weld, particularly in structural steel work applications, so this first section will look at some of the design considerations of fillet welds. They may be used to make T, lap and corner joints (Fig.4).

A fillet weld is approximately triangular in shape, the size being defined by the weld throat or leg length as shown in Fig.5.

Fig. 5. Terms used to describe features of a fillet weld

Fillet welds sizes should be specified preferably by referring to the throat thickness ‘a’ although the leg length ‘z’ is often used and can be easier to measure during weld inspection. Conventionally, the leg lengths are regarded as being of equal dimensions, the weld forming an isosceles triangle in cross section.

The convex fillet is generally undesirable for two main reasons. a)The junction of the weld metal with the parent metal at the weld toe can form a significant stress raiser and will adversely affect both fatigue life and brittle fracture resistance; b) the excess weld metal in the cap costs both time and money to deposit without contributing to joint strength. The concave fillet weld can be beneficial with respect to fatigue strength and, if required, the minimum throat thickness MUST be specified.

Fillet welds are less expensive to make than butt welds as there is no requirement to cut or machine a weld preparation. Although they are capable of carrying substantial loads they should not be used where the applied loads put the root of the weld in tension, particularly where the loading is dynamic – fatigue life, in particular, is drastically reduced. Where such loading is a possibility then a double-sided T-joint should be made using two fillet welds ( Fig.6).

It is commonly thought that the fillet weld is an easier weld for the welder to make than a butt weld as the weld is deposited on solid metal. However, this is not necessarily the case when full fusion into the root of the weld is required. It is not unknown for highly skilled welders to fail a fillet weld qualification test where this is a design requirement. This is an important point and needs to be considered first by the designer asking if it is an essential requirement and secondly by the fabricator when pricing a contract.

This also raises the point that the fillet weld is extremely difficult to volumetrically examine using non-destructive testing techniques to confirm its internal soundness. This applies particularly to the root region where it is not possible to measure, with any degree of precision, any lack of fusion, slag entrapment etc. Therefore the same reliance on joint integrity, and hence service performance, should not be placed on a fillet weld as may be placed on a fully inspected butt weld.

Fillet welds are the least costly weld type to make since the components to be joined do not require flame cutting or machining of a weld preparation, the pieces can be propped against each other and the welder can then deposit a single pass of weld metal against a solid metal backing.

Whilst this sounds simple there are some aspects of making a fillet weld that must be taken into account (in addition to those already mentioned.

Cooling rates in a fillet weld are greater than in a similar thickness butt joint. There are three paths by which heat will be lost from the weld. This fact means that lack of fusion/cold start defects is more likely, particularly in high thermal conductivity metals such as aluminium and the risks of cold cracking are increased in carbon and low alloy steels. What may be acceptable in terms of heat input and/or preheat temperature for a butt weld may therefore not be acceptable with a fillet weld configuration. This point has sometimes been overlooked, particularly when welding on temporary attachments such as strongbacks, where quality control may be somewhat lax. This has led to major cracking problems for some fabricators.

Unlike a butt weld where the required weld throat is generally the thickness of the parent metal, the size of a fillet weld is determined by the loads that it is expected to carry. It can therefore be of any size that the designer specifies although there are practical limitations with respect to both minimum and maximum throat thickness.

With the conventional arc welding processes, it is difficult to deposit a fillet weld with a throat less than some 2mm. This is in addition to the possibility of the lack of fusion/cold cracking mentioned above due to the rapid cooling rates experienced by small fillet welds. The maximum size of the fillet weld is generally that of the thickness of the thinner of the two items being joined but very large fillet welds may cause unacceptable distortion and/or extremely high residual stresses. In addition, above a certain size it may be more economical to make a T-butt, rather than a fillet weld.

Although the throat thickness is regarded as being the most important dimension for design purposes it is a fact that mechanical failure of fillet welds is often along the fusion line or through the parent material itself. One reason for this in carbon or low alloy steels is that the weld metal is mostly substantially stronger than the parent metal.

As mentioned previously there are a variety of fillet weld shapes that make the accurate measurement of the throat thickness a little more difficult than may be first thought.

The throat is the shortest distance from the root to the face of the weld. To measure this dimension in a regular mitre or flat faced fillet weld is relatively simple. The shape is that of an isosceles triangle, the throat being 0.7 of the leg length. Convex, concave and deep penetration welds, however have throat thicknesses as illustrated in Fig.7.

It is apparent then, that measurement of either leg length or actual throat thickness alone is not reliable in determining the design throat thickness of a weld but that the weld shape must be taken into account. The excess weld metal of the convex weld gives no benefit with respect to design strength and, from a cost point of view, the fillet weld face should be as flat as possible.

The deep penetration weld is a very cost-effective way of increasing the joint strength as only a proportion of the weld metal is from deposited filler metal. However, it is not possible to measure the throat of a deep penetration weld. To guarantee that the minimum design throat has been achieved it is necessary to control welding parameters and fit-up within very tight tolerances. This type of weld is therefore generally made using an automated or mechanised welding process (submerged arc or spray transfer MIG/MAG) in order to achieve sufficient and consistent control of the welding parameters.

When deciding on the size of a fillet weld it should be remembered that a small increase in throat thickness will result in a large increase in deposited weld metal as the cross-sectional area of a fillet weld is a function of the square of the leg length (area = z2/2). Increasing the throat from, say, 5 to 6mm results in an increase in area and therefore weld metal of around 45%. This equates to almost 0.1kg extra weld metal per 1 metre length of weld. There are thus substantial cost and weight penalties to be paid if the joint is either over-specified by the designer or over-welded by the welder. There are no hard and fast rules about the point at which it is more economical to change from a fillet weld to either a double-sided fillet weld or a partial penetration butt weld. Areas quoted in Fig.8 are worth bearing in mind when deciding on fillet weld sizes.

For a fillet weld loaded in shear (the load parallel to the weld) the calculation of stress on the weld is simple; it is the load divided by the area of the weld throat.

It is assumed for design purposes that fillet welds fail through the throat and it is therefore a simple matter to calculate the cross-sectional area capable of carrying this applied load when the strength of the weld metal is known.

Note that the shear strength of a metal is generally around 70% to 80% of the tensile strength. This figure is often factored to give an acceptable margin of safety. In the UK for plain carbon steels a shear strength of 115N/mm2 is frequently used, enabling the throat thickness to be calculated from the simple formula throat:- throat ‘a’ = P/(L x 115).

The throat dimensions of a double fillet weld T-joint loaded in tension can be determined using the same approach. Note, however, that this is a very simplistic calculation and does not take into account any other stresses (bending, torsion etc) that the weld may experience. It is however beyond the scope of these brief articles to cover in any depth the stress analysis of welds.

The content of this article was correct at the time of publication. 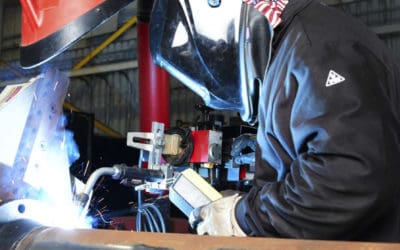 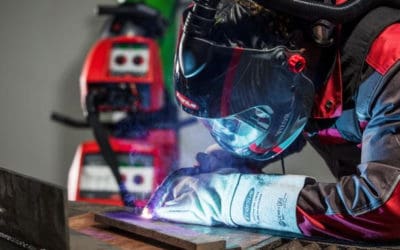 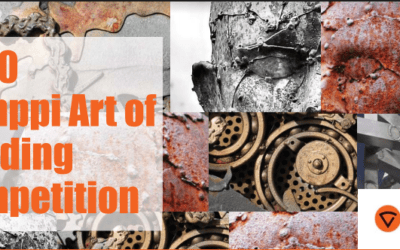